Is this generosity or self sacrifice?

Home > Blog Posts  > Is this generosity or self sacrifice? 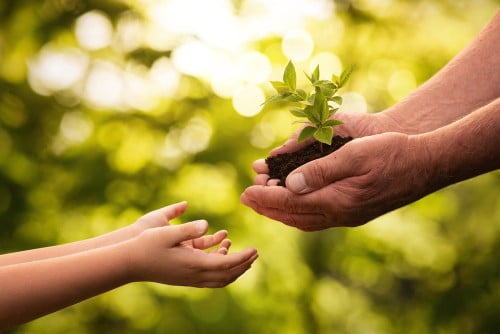 Is this generosity or self sacrifice?

I recently came across the story of The Giving Tree by Shel Silverstein which many people think is a story about generosity but is a helpful story to understand self sacrifice. If you are not familiar with the tale it is about a boy who has a very special bond with a tree. As he grows up, he makes frequent visits to the tree and starts to take all that she offers him and the tree does this willingly, giving the boy what-ever he wants whenever he wants it. Over the years he takes all of her apples to eat, chops down all of her branches to use for building a house and eventually chops down her trunk to build a boat. Finally, all that is left of the tree is a small stump and she has nothing left to give. On the surface this story might seem like it is about giving…about generosity…about unconditional love but actually, as a recent article in the parenting section of the New York Times suggested, look a little deeper and it’s a story about self-sacrifice, about one sided relationships and ultimately about abuse as the tree ended up destroyed by the boy.

How do we identify Self Sacrifice

As a schema therapist if I had to hazard a guess as to what schema the tree had I would probably say ‘self-sacrifice’ and I would say the boy has emerging ‘entitlement’ and sadly this combination within relationships is a pretty common one. The boy put his needs above the tree’s and took whatever he wanted from her without giving back anything in return (entitlement).  The tree was eager to please him, accommodated all his wants at her own expense, set no limits and in the process failed to take care of herself (self-sacrifice). For those unfamiliar with Schema therapy, a schema is a pattern that is laid down typically in childhood and, as Jeff Young (the founder of Schema Therapy) describes in the book Reinventing Your Life ‘reverberates throughout life’. Schema’s drives powerful feelings, thoughts, behaviours and ways of relating to others. For example, someone with a entitlement schema may relate to others in a very demanding and controlling way and feel angry if others don’t do what he/she wants. In contrast to this someone with a self-sacrifice schema may be overly accommodating to others and feel guilty if they try and enforce healthy boundaries or ask others to meet their needs.

When I look around, I am often concerned to see how many people have learnt to ignore their own needs and limits. Being generous with family and friends, or putting in effort at work, should of course not be pathologized but we need to be mindful of one important factor…how much is someone sacrificing themselves in the process? People with a self-sacrifice schema often drop everything for whoever ‘needs’ them-be it their employee who asks them to work extra time, their friend who regularly requests a favour or their child who wants to have the best Halloween costume. They tend to give a lot externally and pay little attention to their own internal world-their feelings and their needs. They often override their need for things like rest and relaxation and put too few boundaries around protecting their own wellbeing.

Sadly, when we come from a place of self-sacrifice we are putting our psychological health at risk. Research shows that people who neglect their own needs are more likely to experience anxiety and depression, emotional exhaustion, low productivity and burnout. There may also be physical health consequences due to lowered immunity.

How to identify the Self Sacrifice Schema

So why did the tree just keep on giving and giving until it had nothing left to give? The story doesn’t provide an answer to this but if the tree were a human, I’d have a few hypotheses! Schemas typically develop when we are young, and the self-sacrifice schema is no exception. We may have grown up with a mother or father who had this schema themselves. Perhaps they acted like martyrs selflessly taking care of everyone else but not attuning to their feelings and needs thus healthy limits and boundaries were not being modelled. We may have also had parents, grandparents, teachers or religious leaders who encouraged and praised self-sacrificing behaviour and/or made us feel guilty if we weren’t thinking about others (be it parents, siblings, friends, strangers) over and above ourselves. And this doesn’t have to be in an extreme way, so for example a parent who is always telling their thirteen year old daughter to play with her eight year old brother and becomes frustrated at her lack of willingness to do this may be failing to see that the thirteen year old girl has her own needs and wants that need to be seen and understood. Another childhood experience that can predispose us to self-sacrifice is growing up with authoritarian parents who are domineering and controlling and either got angry, upset or emotionally cut contact with us if we do not do things his or her way.

There are many other examples I could give of how we might develop the self sacrifice schema but I want to briefly mention what type of parenting experience might protect us from developing a self-sacrifice schema whilst also ensuring we don’t develop entitlement. We need to be taught that whilst it can be a joy to give to others, we don’t do this at our own expense and that our needs are just as important as others. We need to be able to say no to something or someone and to be encouraged to listen to our feelings (such as frustration) that tell us when ‘enough is enough’.

If you are reading this and you can relate more to the types of early experiences that predispose you rather than protect you from self-sacrifice and you see familiarities between your own behaviour and that of the ‘giving tree’ please don’t be disheartened. Therapy has been shown to be effective in reducing the strength of our schemas so they do not need to continue to have such an influence and impact on us as we continue through our adult life.

In conclusion, if you praise the tree for ‘loving the boy and for giving so much’ you fail to see how the tree neglected her own fundamental needs. The tree needed to stop self-sacrificing and to have healthier limits and boundaries around the boy. Yes, the boy shouldn’t have been so self-absorbed but, more importantly than this perhaps, is the tree shouldn’t have given him permission to take so much from her. This doesn’t mean she shouldn’t have given him anything, but she would have been much better off has she recognised that if she gave too much she would be harmed. Had the tree been capable of feelings I would have hoped to see her get a little frustrated, even angry perhaps, as this emotion might have given her the impetus to say ‘no more’. Assertively defending her own boundaries, she would have taken time to rest, to take in the rain and sunshine, to sprout new branches so she could continue providing food and shade and housing and transport. In this way she could have not just survived but continued to thrive.